- Slightly nerfed Evil tree rewards
- Nerfed Skilling contract exp rewards further, the formula is as followed: levelRequired x 50 = exp received (previously 75)
- Removed all different occurrences of isMember/isDiamonddonator on the source (you guys don't care but makes it a lot easier to manage)
- Removed old Daily task code that is unused
- Removed Dungeon architect perk as it'll no longer be needed
- Nerfed Skilling addict perk, It'll now only give 10% bonus experience and rewards compared to 25%, reduced price from $7 to $5
- Reduced price of Tree hunter to $5 from $10
- Reduced price of Divine doubler to $5 from $10
- Increased price of Dungeon master to $10 from $5
- Reduced price of Huntsman to $5 from $6
- Reduced price of Master fledger to $5 from $6
- Reduced price of Dedicated divination to $5 from $10
- Herbivore no longer doubles Potion timers
- Reduced price of Herbivore to $5 from $10
- Increased price of Delicate craftsman to $5 from $3
- Sleight of Hand no longer gives 100% pickpocket chance
- Reduced price of Sleight of hand to $5 from $6
- Removed the Pet trainer perk
- Added a new Perk: House Extraordinaire, this perk will provide +15% Construction exp and also give you +20% prayer exp when using a Gilded altar in your home
- Updated all new Skilling perk descriptions
- Altar of war now restores Prayer regardless of rank
- Added Dinosaur bones to the Gilded altar table
- Made it so you can buy the Superior armour patch from Pest cfontrol
- Removed Tool leprechaun teleports between Patches
- Removed ;;lletya teleporting
- Removed Barrows from Stanley's limelight as it's on the Boss portals options
- Claiming items from Death now goes directly to your bank
- Removed Training staff, Training bow and Training sword having hidden definitions to increase accuracy
- Disabled Nastroth game mode changing
- Disabled Mr ex game mode changing
- There's been a bit of debate about how we should handle game mode changing, and due to this, we've decided at the start of Ataraxia there will be no game mode changing through NPCs, methods may arise post-launch but for the integrity of the race to max competitions there'll be none
- Added Lumbridge slayer cave entry/exit
- Added Burthorpe slayer cave entry/exit
- Added Grotworm lair floor entries and exits
- Added Falador pig pen entry/exit
- Added all of Turael's missing Slayer monster NPC spawns in the above locations
- Added Manifest shadows entry/exit
- Removed Xuan dialogue to replace Imbued gears
- Edited Xuan's dialogue to add extra options
- Removed Greater and Master wisdom auras
- Nerfed Wisdom, Supreme and Legendary wisdom auras to 2.5%, 5% and 10% bxp from 10%, 35% and 50%
- Removed all custom auras from shops including: Greater wisdom, Master wisdom, Greater vampyrism, Master vampyrism and Supreme vampyrism aura
- Added all base Skilling outfits to the Loyalty shop
- Regular Vampyrism once more restores 5% health when dealing damage
- Added Reckless and Maniacal auras to Xuan's $50 shop
- Added new Mining contracts to Mine: Orichalicite, Drakolith, Necrite, Phasmatite, Banite, Light animica and Dark animica
- Removed the ;;bank command perk, this perk while awesome unfortunately decimated the opportunities we had to expand on certain content when we had to consider the fact anyone could void it for $20
- With this decision we'll be able to expand other perks as well as ensure Ore box, Soil box, Gem bag, Crystal trisk bag etc are useful
- Nerfed Skilling champion reward amounts, removed Uncut onyx, Crystal triskelion rewards
- Reduced the average amount of thieves per Thieving contract
- Removed all Smithing contracts, Smithing contracts will now purely be Smelting contracts
- Added the following Smelting contracts: Orichalicite, Drakolith, Necrite, Phasmatite, Banite and Elder rune bars
- Removed the ctrl-b command
- Removed Lumberjack/Golden mining equipment from Evil trees/Shooting stars


- If you take a look: https://ataraxia-ps.com/store
- There's a lot of items now on the Store, prices aren't finalised on anything apart from Void equipment
- Amulet of Farming: This amulet provides teleports to every Herb, Tree and Fruit tree patch: 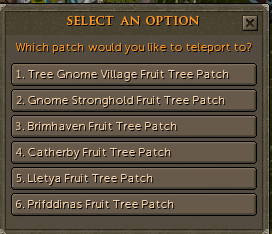 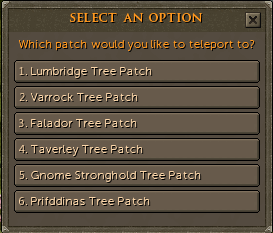 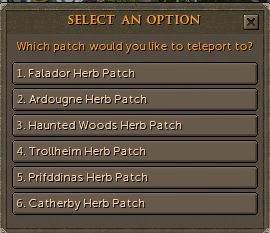 - Donor Transfer Scroll: This scroll will allow you to transfer all of your perks and Donation total to another account, however, it will disable the account you use it on permanently. This item was added as in the past, we constantly transferred donation totals and it took a lot of time out of the Moderator's duties, this way, it's in the player's control.
- Name Change Scroll: This scroll will be redeemable with any Administrator to permanently change your account name. We've previously done this based on Donation rank/in-game gp for the Name change/I just do it for free anyway, now it'll cost a set amount and only be redeemable through this.
- Another large change is the addition of all Skilling outfits to the Store, these are only the base sets like Artisan's, Golden mining etc. You can buy each set for $5 or every set for $75
- Herbicide: This can also be purchased from Dungeoneering, it'll grind any dropped Herbs into Herblore experience
- Seedicide: This item will grind any dropped Seeds into Farming experience
- Spring Cleaner: This item breaks down metal drops into their base components and sends the result to your bank

- The new Donor zone is completed, with huge help finding the area from Xenthium and various beta testers, the new zone is done
- To enter the zone you will require at least Bronze member ($20 donated)
- Instead of a wall of text, it's best to walk you through and then I will list the requirements for each object!

- The Slayer update is finally upon us, something I wanted to ensure we had on the launch was the RS3 slayer system, with different Slayer masters, every task available, task weighting, task preferring, task extending, the proper Slayer rewards and all of the bits in between
- Armar has been working hard on the new Slayer system and happy to announce it's done!
- To start, you can talk to the Slayer master at home, (default is Turael): 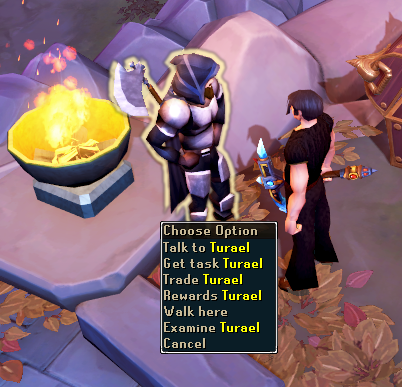 - When you progress with Slayer, you'll unlock more Slayer masters, you can access these by talking to Turael and selecting: 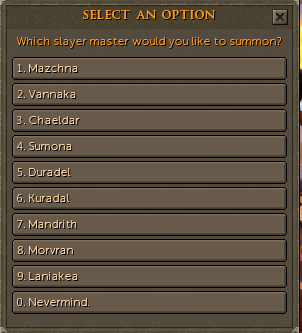 - Doing so will replace Turael with the Master of your choice, you can then get a task from their task list rather than Turael's
- Slayer VIP Tickets have been added! You can redeem these to be offered two potential tasks when getting a new one! Like this:

- With this update brings a lot more variety to Slayer! With almost every task in the game
- You can find a detailed list about what Master has what tasks here: https://runescape.wiki/w/Slayer_assignment
- We have removed the following tasks: Brine rats, Catablepon, Fleshcrawlers, Mogres, Sea Snakes, Shades, Molanisks, Killerwatts, Terror dogs, Scabarites, Suqahs, Warped tortoises, Warped terrorbirds, Creatures of Daemonheim, Stalker creatures and Ghouls.
- Along with this update, the Lost grove and Anachronia creatures have been added! All Lost grove creatures and Anachronia creatures have been added with their RS3 combat mechanics and drops!
- There's too much to cover without being a huge wall of text, tl;dr RS3 slayer is added to Ataraxia, it's perfect.

The Update doesn't look as big as previous, however, the content involved in this update is probably 5x the others.

We're making swift progress and on track for release before April. When we know closer to the date is when the date will be announced.

The Slayer system is finished, we're still testing specific drop tables etc, but as a whole it is done, some spawns missing.

Luck rework is completed, testing is required before including it in an Update.

Hazelmere's Signet Ring is in the game.

Archaeology dig sites, artefacts, restorations and everything in between is completed and in testing.

Little to no progress made

Luck rework completed and in testing

The current projects being worked on at the moment are:

Stay up to date with our progress on Ataraxia 2 through our Discord: https://discord.gg/yuKh6Qt/

Leading the NXT generation through 2021.

Copyright © 2021 Ataraxia. All rights reserved.
Runescape is property of Jagex Ltd. We are not affiliated with Jagex Ltd.